Let customers speak for us

I purchased this because I was tired of different charging wires running everywhere to all my devices. I have an Apple Watch 6, 11 Pro Max and AirPods. Everything charges fairly quickly. The led light around the bottom (blue and green) is great for knowing the charging status. It can be turned off with a touch button in the base for nighttime. The light also lets you know if your phone is in the proper charging position as it will blink both colors quickly to let you know it isn’t. Only one charging wire from outlet to back of charger. I also have a fairly rugged phone case and it still charges with no issues. If you like a one stop shop area for your electronics...this is it. First off, yes you can turn the LED lights on/off that are on the base. I was worried about this but saw an answer but no detail on how: There is a touch-sensitive button on the right side in front of where you plug in your AirPods. See attached image (yellow circled area). This is very important as I plan to use this on my nightstand next to my bed and the blue/green lights are pretty bright.

Onto the actual review: This is the 4th combo dock that I've purchased from AMZ since I received my Apple Watch Series 5 (with the latest 6.x watchOS installed). This is also the ONLY one that has worked so far to charge the watch (aside from the original Apple charger that came with the watch). All other docks would go into this start/stop charging cycle every few seconds and the watch would never actually charge.
I purchased a 3rd party QC 3.0 charger per specs and it worked like a charm.

I have not had a chance to do any charging "speed tests" but when i get the chance i'll update my review. Right now i have all 3 devices (iPhone XS, Apple Watch Series 5, and Airpods Gen 1) all connected to the dock and charging. 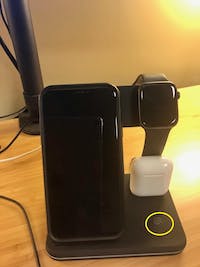 Edit : The seller reached out and offered a refund, and I highly value good customer support. If they ever make a new version of this charger, I will certainly buy another one.

I am kind of disappointed with this product. My iPhone 12 charges but my apple watch SE stops charging after a couple of minutes. I tried restarting my watch, replacing it on the charger, nothing works. It's really annoying when you think you fully charged your watch and it's not. It's sad because I like the design of the device, it just doesn't work as advertised. I can't recommend.

I am using the original charger, cable and there is no case on my watch. I had been looking for a 2-in-1 wireless charging stand with a built-in Apple Watch charger for some time, and I finally came across this one that checked all my boxes. This stand is actually a 3-in-1, but I don?t have AirPods so I can?t comment on its ability to charge those.

The first box was that it could charge the phone in landscape and portrait. I have an older stand in the bedroom where I have to manually move the position of the charger in order to achieve this, but with this one, I just put it in either position and it starts charging which is great. I have a relatively thin Speigen clear case on my iPhone XS and it has no issues charging on this stand.

The second box was that it could charge a Series 5/iOS 6 watch. Most of the other stands out currently can?t do that. I have a Series 2 watch but I plan to upgrade soon and didn?t want to have to invest in a new stand, so this saves me that trouble.

The third and final box was that I needed to be able to charge both devices with the phone in either landscape or portrait. There are a few charging stands that only allow you to put the phone in one position if the watch is also on there, but this one doesn?t have that problem.

I do have a few cons, but none of them enough to take any stars away or prevent me from buying probably two more (one to replace the old bedroom charger and one for the main floor):

I wish they just threw in a suitable AC adapter. I would pay the extra few bucks not to have to order one separately. I wish the grips on the bottom were more ?grippy? but that could be the glass desk I have it on in my office. Lastly I wish the lighting scheme made a little more sense. It glows green if nothing is on it or if the watch is on by itself and is fully charged. It slow blinks blue if the phone or watch are charging (even if the phone is on by itself and fully charged) or if both devices are on and charging (even if both are fully charged). It does a fast blue/green blink if the phone isn?t on correctly which is helpful, and there is a touch sensitive button to turn the led indicator off completely, which would be nice in a bedroom setting. Even with these cons, I will still buy it again and recommend it to anyone in the market for this type of charger. 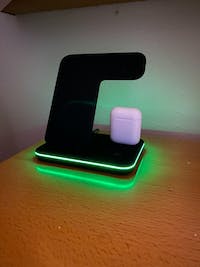 I am in love with this charger. It is so worth the money. I have everything all together and it charges fast. I love how the phone is sitting upright so I can interact with it while charging if need be. Also space saving these days having space to plug all your gadgets in is difficult. I at one point had 2 power strips on the end of my bed for all my things. With this I have eliminated one of those power strips. It feels solid and not cheaply made. I recommend this to anyone it will outlast your current charging station if you have one try it I absolutely love my charging port. I bought another one from another company and it didn't support my airpod pros and only charged my watch sometimes but this one is the best make sure if u have the pros u turn the case backwards that's the only way it will charge.... also love how the LED light indicates if ur charge is full... green light means it's idle on standby blue light means it's charging... grab this it's awesome

I have to say that this is probably the best thing to happen to me and let me tell you why. I had other wireless chargers and I will wake up and the phone will be completely dead after I made sure it was charging. In the middle of the night somehow it just stops. Now this charger turns colors and I didn’t need any original adapters bc it comes with their own. How awesome is that? I have the new iPhone 12 pro and it charges so if your having second thoughts about this one just stop and purchase bc you won’t be disappointed. This is my second 3-1 charger. After many independent chargers for each product. This one is my current favorite. Haha! You figured that since this is the second? Right?
Ok, these are what I think this charger has above the others.
Everything has a spot that does not interfere with another. Others they push or bump the other, specially the watch.
The watch stays put, this design allows the watch band to curl without pulling the watch off the magnet. (This was a problem for others and you would not know until you put it on, major bummer!)
The light can be turned off!!!! That’s HUGE!
I have it on until I go to sleep and then it goes off with the tv.
Works with AirPods pro, just backwards. Not a big deal for me to see the back of the case. They charge!
It’s sturdy and compact, nothing moves around due to the weight of the phone or watch.
This is a really good charger. Orders will be processed in USD.